The “Chilcotin Ark” is truly biblical in its proportions and we’ve often quipped we hope that heaven might be as nice.  Check out the latest book by author/photographer, Chris Harris. This article also shows some of the spectacular views you may see on ROAM’s Chilko Chilcotin Fraser river expedition too!

The Great Bear Rainforest is known for being one of the most spectacular places in B.C., but near that region is an area that some people believe is even more special.

Dubbed the “Chilcotin Ark”, it’s a stretch of land that reaches from west of the Fraser River in the Cariboo to the Coast Mountains on B.C.’s Central Coast.  And it’s the subject of a new book by photographer Chris Harris.

“‘Much like during the last ice age, there was a refuge in Yukon [and] Alaska called Beringia and that’s where plant life, animal life and human life survived during the ice age,” he said.

“Should climate warming continue, the Chilcotin Ark is large enough and diverse enough and it’s continuous. It’s enclosed where life could survive during extreme heat.”

The executive director of B.C. Spaces for Nature says he was looking into how to preserve the area when it became clear to him that it could be a significant location as the climate began to change.

“In the case of the Chilcotin, one of those saving graces is going to be that there’s a lot of vertical elevation there,” said Careless.

“Animals that are going to be looking for colder ecosystems can either try to go hundreds of kilometres north or hundreds of metres up slope. So a place like the Chilcotin truly does become an ark.” 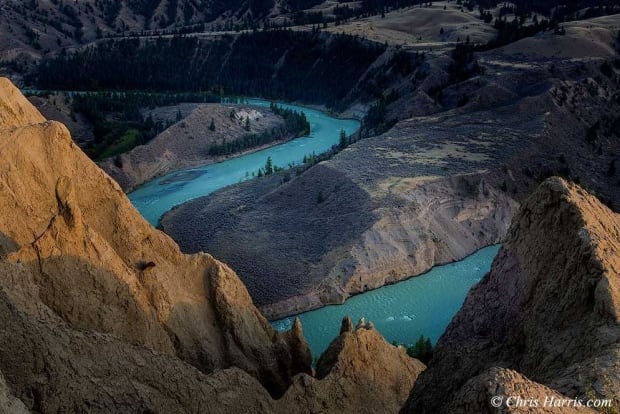 The Chilcotin River runs through the area dubbed the ‘Chilcotin Ark’. (Chris Harris/chrisharris.com)

Careless is excited to see the area getting more attention.  “It’s really the best kept wilderness secret in Canada,” he said.

Harris said his hope is that people feel better connected to the area and understand its significance because of his book and his photos. “My greatest dream is the people embark on a journey of reconnecting with the planet,” said Harris.